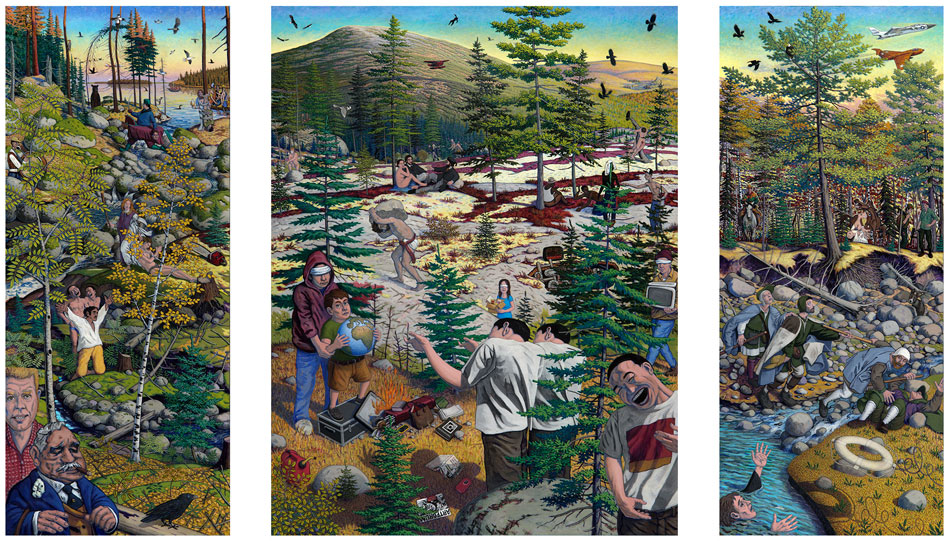 About the References Below is a list of artworks by other artists, both historical and contemporary, that Shillady referenced in his triptych Triumph of Irrational Dogma. Enjoy finding each reference!

About the Trilogy  Robert Shillady’s masterful trilogy includes three narrative paintings—a series he has spent the past eight years creating. Shillady recently completed the third painting in the series—an impressive 53 x 93 triptych, Triumph of Irrational Dogma (2022), which joins Icons of the Spiritually Certain (2015) and The End of Dada? (2012). The paintings reference the artworks of other artists, both historical or contemporary. This is the first time Triumph of Irrational Dogma has been exhibited, and the first time all three paintings have been on view together. A must see exhibition!

Click here to see the reference for Icons of the Spiritually Certain  and The End of Dada?

References for Triumph of Irrational Dogma
“Much as Manet, Jake and Dino Chapman, and Yue Minjun have adapted artwork from the past to address their own realities, Triumph of Irrational Dogma (2022) includes more than 30 images, altered for light and perspective, within a composition incorporating six landscapes I painted in Maine. In this triptych I attempt to point out the foibles, the irrationality, and the cruelty that have plagued mankind today, and since the beginning of civilization. Artists reflecting the zeitgeist of their age have addressed them, over and over.”  —Robert Shillady

33. Gone: An Historical Romance of a Civil War as it Occurred B’tween the Dusky Thighs of One Young Negress and Her Heart, Kara Walker, 1994.