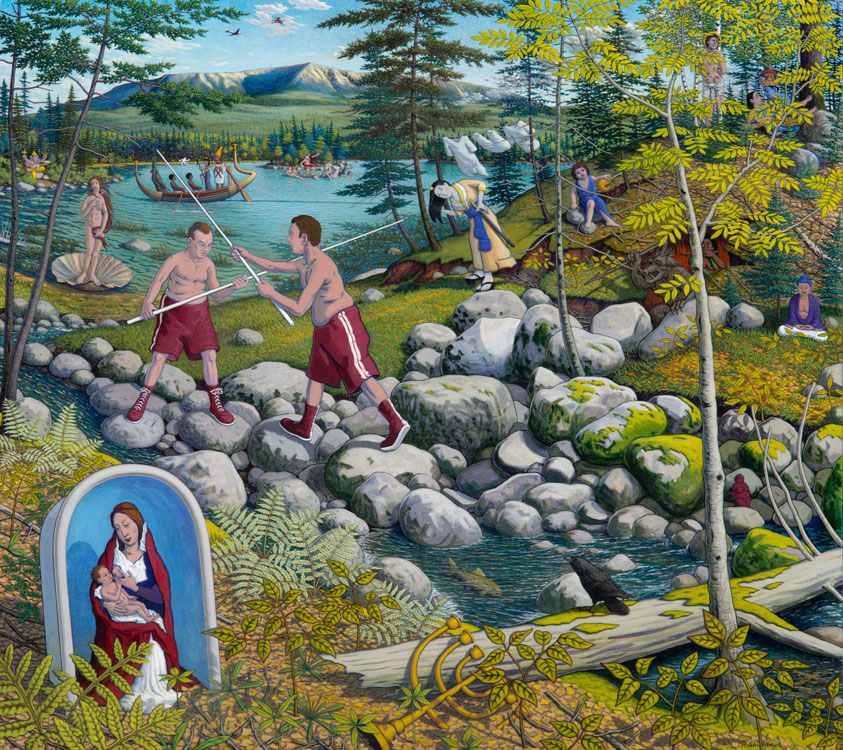 About the References Below is a list of artworks by other artists, both historical and contemporary, that Shillady referenced in Icons of the Spiritually Certain. Enjoy finding each reference!

About the Trilogy “Robert Shillady’s masterful trilogy includes three narrative paintings—a series he has spent the past eight years creating. Shillady recently completed the third painting in the series—an impressive 53 x 93 triptych, Triumph of Irrational Dogma (2022), which joins Icons of the Spiritually Certain (2015) and The End of Dada? (2012). The paintings in the trilogy reference the artworks of other artists, both historical or contemporary. This is the first time Triumph of Irrational Dogma has been exhibited, and the first time all three paintings in the trilogy have been on view together. A must see exhibition!

Click here to see the reference for Triumph of the Irrational Dogma and The End of Dada?

References for Icons of the Spiritually Certain“Icons of the Spiritually Certain (2015) addresses the cacophony of a world with a history of different faiths. All of them preach peace and harmony among their followers and yet their adherents sometimes interact like Neo Rauch’s stick fighters, who have been altered in my version to represent L. Ron Hubbard, inventor of Scientology, and Christopher Hitchens, writer and atheist philosopher. The painting also includes Katahdin, “the greatest of mountains,” sacred to the Penobscots, as well as a landscape I did of Black Brook in Brooklin.  —Robert Shillady

8. The crow, a Native American clan symbol and a traditional character for Vikings as well.

9. The Ascent of the Prophet Muhammad to Heaven, attributed to Sultan-Muhammad, Persian, 1539–1943.

13. Katahdin, “the greatest of mountains,” sacred to the Penobscots. Some retellings of traditional tales say it’s the summer home of Pamola, variously described as a thunder god and an angry spirit to whom one must sacrifice to avoid a curse or injury.

16. Star and Crescent, commonly recognized today as the symbol of the Islamic faith. It dates from 2100 BCE as a symbol of the Sumerian civilization’s sun and moon gods.

19. Brook Trout, Neil Welliver, 1973. The fish as a symbol of Christianity is my intent, not Neil Welliver’s.

21. Tal, Neo Rauch, 1999. Battling it out in my version are L. Ron Hubbard (left), inventor of Scientology, and Christopher Hitchens, writer and atheist philosopher.

23. Young Bacchus, Giovanni Bellini, c. 1505/1510. Bacchus is the Roman equivalent of the Greek Dionysus, the god of wine but also of the irrational and chaos, which is the whole point of this painting.