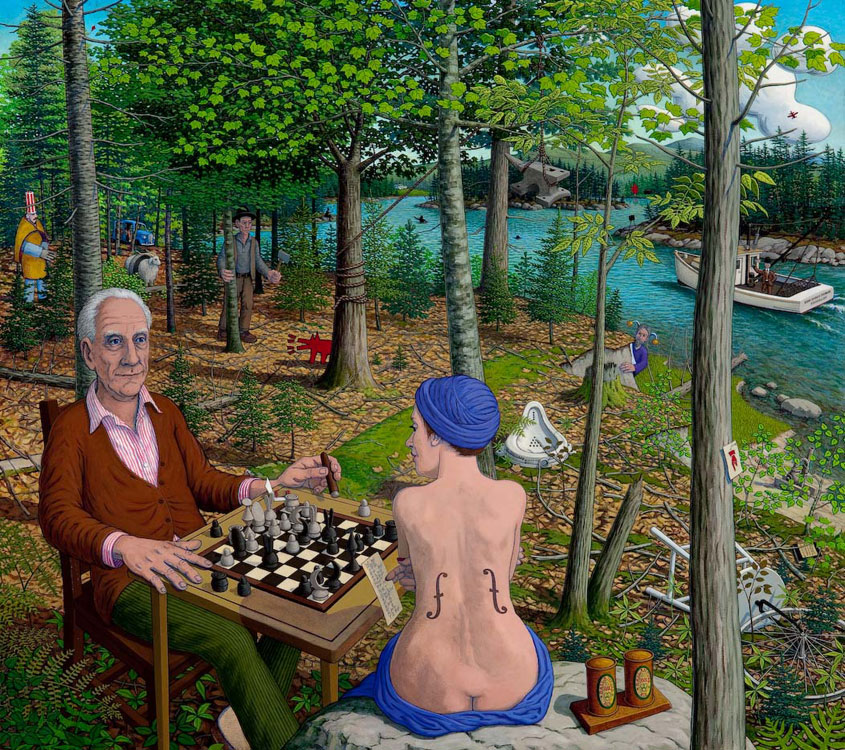 Robert Shillady: The End of Dada?

About the References Below is a list of artworks by other artists, both historical and contemporary, that Shillady referenced in The End of Dada?. Enjoy finding each reference!

About the Trilogy “Robert Shillady’s masterful trilogy includes three narrative paintings—a series he has spent the past eight years creating. Shillady recently completed the third painting in the series—an impressive 53 x 93 triptych, Triumph of Irrational Dogma (2022), which joins Icons of the Spiritually Certain (2015) and The End of Dada? (2012). The paintings reference the artworks of other artists, both historical or contemporary. This is the first time Triumph of Irrational Dogma has been exhibited, and the first time all three paintings in the trilogy have been on view together. A must see exhibition!

References for The End of Dada?
“The End of Dada? (2012) was inspired by a survey of artists, curators, and critics, a majority of whom believed Marcel Duchamp’s Fountain was the most influential artwork of the twentieth-century. My painting includes not only Duchamp himself and artwork by his contemporaries, but work by artists in the twentieth and twenty-first centuries who were influenced by the freedom from academic and cultural restraint, which the early Dadaists engendered. The painting includes my version of Tom Curry’s Chatto Island, as well as an image of Tom done up in the guise of a Kara Walker silhouette figure.  —Robert Shillady

1. Clouds are Jean Arp sculptures, the red tree from his wood relief, Forest.

2. Some of the black silhouette figures are from Kara Walker’s Endless Conundrum, others are made up but in her style.

4. Man with cape and red and white hat is Hugo Ball at the Cabaret Voltaire in 1918 performing sound poems.

5. The Goat is Robert Rauschenberg’s Monogram.

6. The man with the hatchet is Joseph Bueys, who started the German Fluxus Movement and revived Happenings in the 60’s and early 70’s.

7. The red dog is a Keith Haring’s image used in his paintings and Graffiti Art.

8. The man in the boat is from George Grosz’s The ‘Republicomic’ Automatons.

9. The rigging in the boat is derived from Francis Picabia designs.

10. Non Omnis Moriar is from a Horace Ode, the translation is I shall not wholly die.

11. The Goatman is my own creation, representing Buffoonery. He has been immortalized in my partner Ellen Booraem’s young adult novel The Unnameables (Houghton-Mifflin Harcourt, 2008).

12. The man playing chess is Marcel Duchamp; the urinal is his readymade The Fountain which was voted the most important twentieth-century artwork by a gathering of museum curators, critics and gallery owners. The stool and bicycle wheel is his first readymade.

13. The red finger is the calling card of Tristan Tzara, writer of the 1918 Dada Manifesto.

14. The sculpture made from a miter guide and plumbing parts is Morton Schamberg’s God.

15. Howl is Allen Ginsberg’s poem, which was accused of being Dadaist by witnesses in a California courtroom as a reason to censor it and stop its publication. The suit failed.

16. The chessboard was made by Max Ernst.

17. The woman playing chess is from Man Ray’s photograph Violon d’Ingres. She is holding a letter poem by Kurt Schwitters, the German collagist.