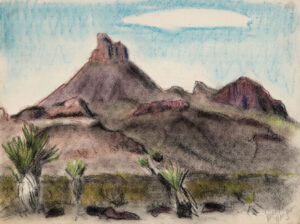 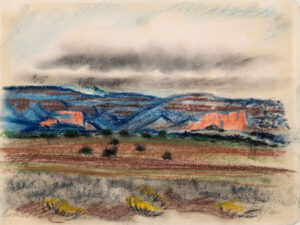 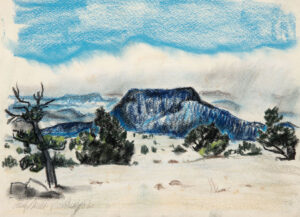 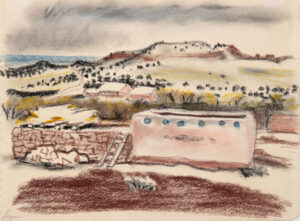 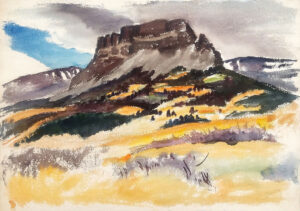 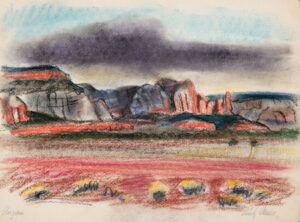 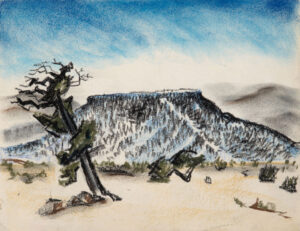 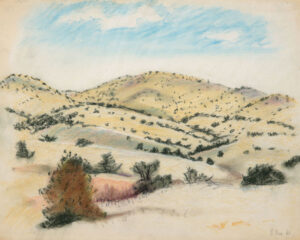 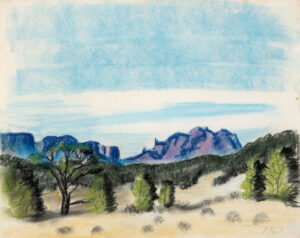 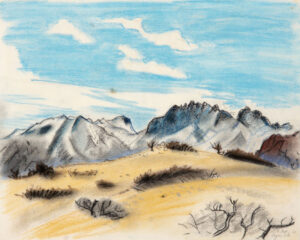 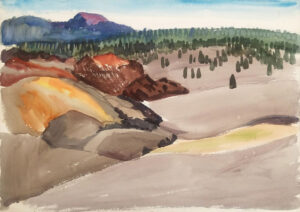 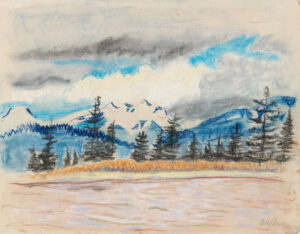 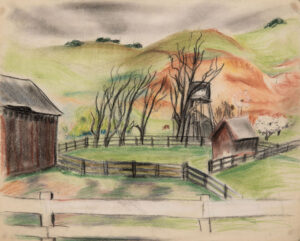 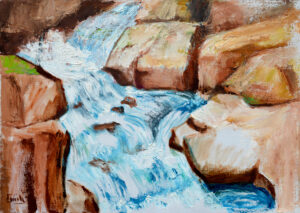 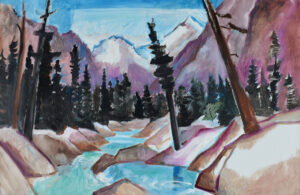 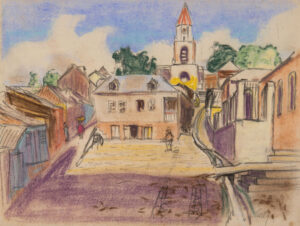 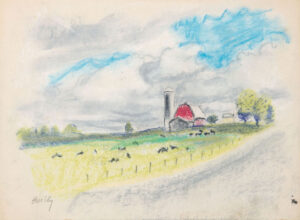 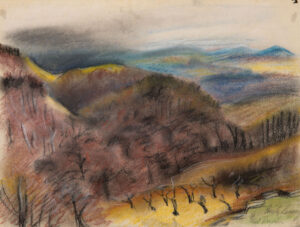 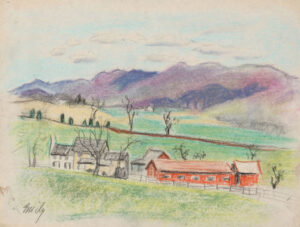 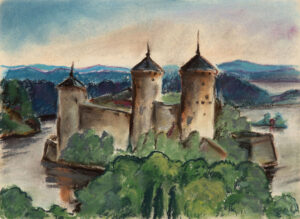 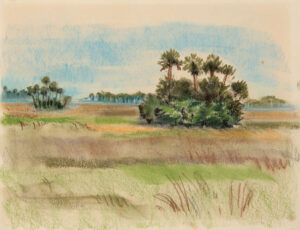 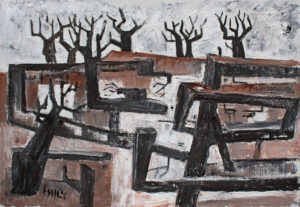 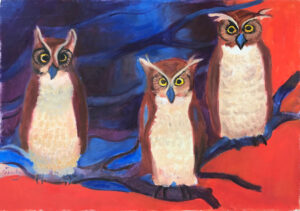 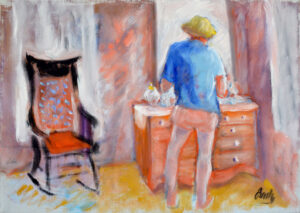 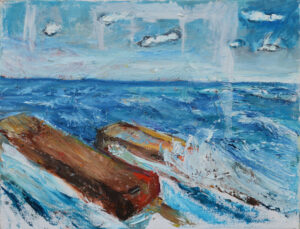 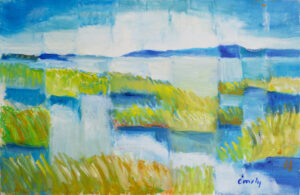 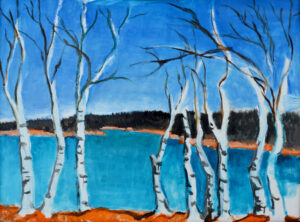 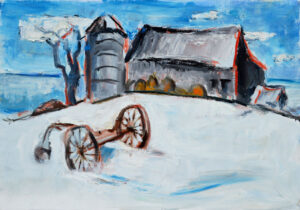 Emily Muir (1904–2003) was an American painter, architect, conservationist, and philanthropist, who spent most of her long life in Stonington, Maine. Here Emily and her husband William Muir, a nationally known sculptor, dedicated their lives to making art.

Emily explored many styles and materials, and created her own fascinating hybrid of style. She had her own take on cubism, for instance, where space, light, and color are employed to present faceted scenes of lobstermen and their boats, and the seas upon which they toil. In addition to scenes from her adopted home state, for which she was best known, Emily painted portraits, florals, musicians, and the people and landscapes from her many travels. Emily also published two books, Small Potatoes (1940) and The Time of My Life (2002), her autobiography. Her work is in numerous private and public collections, including the , the Brooklyn Museum of Fine Art, the Farnsworth Art Museum, and the Portland Museum of Art.

Although Bill’s primary focus was sculpture, he was also an accomplished painter. During their many travels, Emily and Bill often painted the same scene, and to see these paintings side-by-side is quite remarkable. Remaining in the Muir estate are outstanding oil paintings and pastels by Emily and Bill of Trinidad and the West Indies, South America, Europe, and the United States.

Emily Muir was born in Chicago in 1904, and by her first birthday the family relocated to New York, her father’s home state. Emily studied art in high school and after attending Vassar College for one year, she entered the Art Students League in New York City, where she studied with Richard Lahey and Leo Lentelli. Lahey became a major influence, she noted, because he pushed her to paint with feeling—to paint what she felt—not so much what she saw. But her life-long inspiration was her future husband, William Muir, whom she met at the League where he was working as a sculpture class monitor. She said it all came naturally to Bill: “With him it is no theory, it is a response to life.”

Emily married Bill in 1928, and the couple often worked together. To help pay the bills, Emily began her career as a portraitist, which she had studied at the League (Isamu Noguchi was in her class). During the Depression, the Muirs became successful commercial artists and traveled throughout Europe and Latin America designing dioramas for the Moore-McCormick steamship line, a cruise line company. As she wrote in her autobiography, “With luck, love, and ingenuity, we survived The Great Depression.”

Her parents bought 85 acres of land on Deer Isle, Maine, and asked Emily to design them a home. Without any official training in architecture, she designed Mainstay, which was built by Pop Joyce, a local builder. Emily and Bill liked the area, and in 1939 they settled down year-round in Stonington, Maine, where they built a home and studio in the 1940s. Here Emily painted, and created ceramics and mosaics. Although landscapes and seascapes predominated, Emily continued paintings portraits, and over the years many people came under her spell as subjects, friends, and collectors of her artwork.

Outside the studio, Emily was the first woman to serve on President Dwight D. Eisenhower’s National Commission of Fine Arts, a precursor to today’s National Endowment for the Arts, and later President Richard Nixon appointed her to the advisory committee for the Kennedy Center for the Performing Arts. Emily was appointed to the Commission in 1955 by Senator Margaret Chase Smith, whose official portrait Emily had painted for the Maine State House. Muir was actually one of the first—if not the first—to suggest that a percentage of the cost of any new government building be set aside for art to enrich the building. Today that program is called The Percent for Art Program, which eventually caught on nationwide.

Muir served on the Commission’s board through 1959, while simultaneously serving as a trustee at the Portland Museum of Fine Art. That same year, her husband, who was a trustee of the Haystack Mountain School of Crafts, suggested the school move to the Stonington area. At the time Haystack was located in Lincoln, Maine, and had no permanent home. Emily helped Haystack locate a property and to reestablish the school in Deer Isle. While searching for the property, she discovered a lot near Stonington on Crockett Cove, which she purchased and built a house on, launching a second career in architecture. A self-taught architect, Emily ambitiously designed 45 legendary cottages in and around Crockett Cove. She focused on building modern structures that incorporated the landscape, rather than the dwelling. Her sensitivity to environmental concerns were recognized by an award from Design International, and she was given an honorary doctorate by the University of Maine in 1969.

Emily cared deeply about the environment. She owned three islands in Maine, and when a friend asked her what she planned to do with them, Emily decided to preserve the islands by donating them to The Nature Conservancy. In 1970, she sold Russ Island to the Island Institute at a discounted the price. In 1975, she donated nearly 100 acres of woods to the Conservancy, now known as the Crocket Cove Woods Preserve, and she donated Wreck Island to the Conservancy, which subsequently deeded the property to the Island Heritage Trust. The Island Institute founded the Emily and William Muir Fund to develop programs to preserve the area, provide educational opportunities, and to spur community growth.

Emily Muir led a full and loving life. She and her husband William Muir left Maine with a rich legacy of art. Courthouse Gallery is pleased to continue to bring the artworks from the Muir Estate to the public and their many longtime collectors.

Ellsworth gallery owners embrace a chance to manage the estate of William and Emily Muir, prolific artists whose substantial contributons continue to impress Last Christmas, Karin Wilkes’ husband, Michael, gave her a present that made her smile. It was an autobiography of artist Emily Muir, who together with her husband and fellow artist William Muir […]