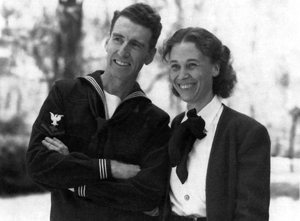 Ellsworth gallery owners embrace a chance to manage the estate of William and Emily Muir, prolific artists whose substantial contributons continue to impress

Last Christmas, Karin Wilkes’ husband, Michael, gave her a present that made her smile. It was an autobiography of artist Emily Muir, who together with her husband and fellow artist William Muir lived for decades in Stonington and became ensconced in life on the Deer Isle peninsula.

Karin Wilkes never met Emily Muir, who survived her husband by nearly 40 years and died in 2003 at the age of 99. But as the owners of the Courthouse Gallery Fine Arts in Ellsworth, the Wilkeses had been interested in the Muirs for some time.

So Karin Wilkes started reading “The Time of My Life,” published by the Island Institute in Rockland. Wilkes found herself drawn into the Muirs’ story.

“She was such a vibrant, contemporary-looking woman. They have a love story,” Wilkes said. “They were a couple. We had been interested in the Muirs before, and we actually went to an auction and bid on a piece but the price went too high for us.”

Little, a well-known Maine arts writer who serves as the foundation’s director of communications and marketing, was wondering if the Wilkeses would be willing to manage the Muirs’ estate, which had been in a gallery in southern Maine the last three years without one sale.

The Wilkeses jumped at the chance, and their first show of the work, “Emily & Bill: The Muir Estate,” went on display at their gallery last month.

The collection numbers hundreds of paintings, sculptures and drawings — so many that the Wilkeses built a shelving system in a storage room in one of the buildings on the Courthouse property.

So far, seven pieces have sold.

“We’re having good success to start with,” Karin Wilkes said. “People know who [the Muirs] are and are familiar with the work and excited to see some on the market.”

That was the reaction Little and MaineCF, also located in Ellsworth, were hoping the work would have. Emily Muir had left the estate to the foundation, establishing the Emily and William Muir Community Fund, which seeks to promote community-based efforts in the Penobscot Bay area. Sales from the estate go toward the fund.

“The Courthouse Gallery seemed to us to be the perfect partner for handling the Muir estate,” Little said. “They are committed to the art and have the capacity to manage and promote it.”

All of the work is for sale with the exception of William Muir’s sculptures, which are slated to go to museums. Not all of the pieces are signed or dated, but the Courthouse Gallery created an estate stamp to verify the source of each piece.

The Muirs settled in Stonington in 1939. They painted (Emily in oils, both in watercolor), sculpted (William did large-scale work, Emily did smaller pieces), designed homes (Emily is said to have worked on more than 40 homes in the area) and created mosaics (Emily again).

“Emily dabbled in everything, the ceramics, the architecture, the painting, watercolors, oils,” Karin Wilkes said. “One of her best-known works is the beautiful mosaic in the entryway of the Farnsworth Art Museum.”

They became active in island life and beyond. They helped the internationally known Haystack Mountain School of Crafts find a home base in Deer Isle. Emily Muir was appointed by President Dwight D. Eisenhower to serve on a presidential council on the arts. She was the first woman to do so.

Although the Courthouse exhibit reveals the breadth of the work, the variety of which is familiar to those who have seen it in Maine, William Muir is recalled primarily as a sculptor while Emily Muir was known for her paintings.

In fact, William Muir had a national reputation as a sculptor. In 1953 alone, Karin Wilkes said, his sculpture was displayed in shows at the Metropolitan Museum of Art and the Whitney Museum in New York, the Pennsylvania Academy, the Detroit Institute and at Bowdoin, Colby and Dartmouth colleges in Maine and New Hampshire.

Yet the estate collection includes many of his watercolors, most of which were painted during the couple’s travels outside of Maine, such as his “Old Faithful,” and sketches, such as a series of drawings of daily life at the Brunswick Naval Air Station.

And Emily Muir may have painted extensively, but the estate also contains some of her small ceramic sculptures.

The Emily Muir paintings in the estate are of interior scenes and landscapes and portraits of daily life. She painted typical Maine scenes as in “Getting Bait Aboard,” a loosely constructed image of men loading a lobster boat, and quirky Maine scenes such as “Stonington Christmas Parade” in which a line of adults and children, including one child dressed as a goose, seems to wait in anticipation of the big winter event. In the background of the parade painting is what appears to be William Muir’s real-life stonecutter monument in Stonington.

Emily Muir seemed to love color, using oranges and purples not often seen in Maine landscapes. William Muir played with different woods and textures. Both were considered naturalists at the time.

Emily Muir’s oils are also remarkable for their take on cubism, as in “Island Off Stonington” with its faceted rocks and fractured ocean.

Although this is the Courthouse’s first full-scale show of the Muirs’ work, some appeared earlier this summer in other shows, or have been on display in other places in the gallery. The rest of the work will provide fodder for future shows. Wilkes envisions an exhibit of the Muirs’ Gauguin-esque tropical island scenes for later this year.

Aside from the practical matter of the Courthouse Gallery having the space and ability to host the Muirs’ estate, it seems appropriate that the work is in a gallery owned and operated by a Hancock County couple active on the Maine scene.

“It’s nice to see these loving couples in the art world, because so much of our perception of the artist is the [loner],” Karin Wilkes said of the Muirs. “They were together, they were prolific, and they supported each other‘s art.”