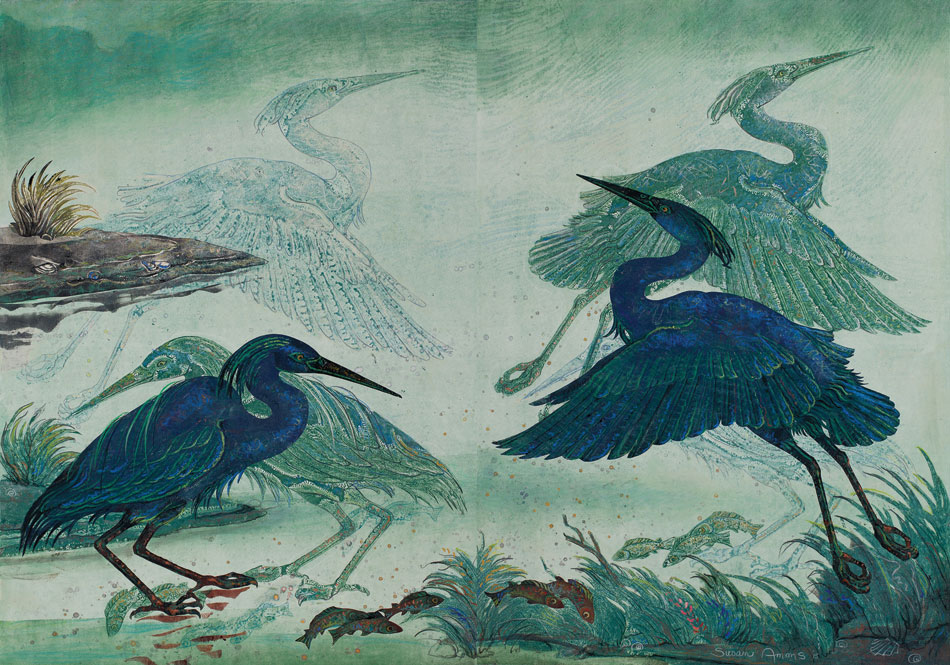 Susan Amons lives between the sea and the salt marsh in Biddeford, where she toils in her home studio to make exquisite paintings and prints — often of birds she can watch nearby, such as eagles, herons, terns, and ducks, but also of caribou, coyotes, lynx, and horses.

Amons is not, however, a wildlife artist. Rather, her prints take on an almost mythic feel as she applies a keen eye and hand to conjure what she regards as totem animals, the companion species of legend with whom we share both physical and psychic space.

“She is a truly original artist doing work that isn’t like anybody else’s,” says Anne Zill, director of the University of New England Art Gallery. “She has a mastery of materials that makes her sketchbooks, prints, paintings, pastels, and collages tactile with a larger-than-life power to them. The birds fly. The coyotes pounce. The horses gallop.”

Though Amons excels in multiple mediums, the imagination and individuality of her prints most recall the contributions of two other Maine-based depicters of animal life: Bernard Langlais, who carved massive, folksy, genre-defying wood sculptures, and Dahlov Ipcar, the painter, children’s author, and illustrator known for her vivid colors and angular renderings. Both are good company to keep in the wild world of Maine art.

For Amons, work always starts with observation. She heads to the woods, a field, a marsh, or a beach. When she spots an animal that grabs her attention, she does several loose sketches to get a feel for the way the subject moves, drawing free and fast to capture its liveliness. The goal is to achieve a sense of the animal outside its temporal context: “Simplify the forms,” Amons says. “Seek the spirit of the animals. Place them in dream time with no horizon lines and no sense of time.”

Her red-tailed hawks serve as fierce protectors, caribou as ancient travelers, crows as messengers, night herons as Charons that accompany souls across the spirit river, and Atlantic salmon as embodiments of renewal. Egrets make one of her most frequent and important subjects, elegant symbols of feminine power (“My mother and her best friend were painters and allowed me to paint with them when I was a child,” she remembers. “My earliest experience was to see women as painters.”).

Symbolism aside, Amons’ actual printmaking process is deliberate and exact. She distills her loose sketches into a simplified, single-line shape drawn on a transparent plastic sheet and cuts it out with a blade. She uses an etching tool to add texture — for the barbs of a feather, for instance. Then she inks the cutout shapes and prints them, re-inking and reprinting up to 15 times with different colors to create layers and depth on the thick, soft sheets of paper. Once she completes an impression, she almost always goes back and draws with pastels to add finishing details, furthering each print’s one-of-a-kind nature.

Amons joined the Maine arts milieu nearly 40 years ago, when she moved to Ogunquit after graduating from Massachusetts College of Art. Her work at the time consisted largely of landscape paintings, and she fell in with the Ogunquit art colony, her first local foothold. In 1979, one of her etchings, an island landscape, appeared in the All-Maine Biennial, an important exhibition at the Bowdoin College Museum of Art that galvanized the state’s contemporary art scene.

In 1985, Amons and her husband designed and built their home in Biddeford. A few years later, she began making prints and paintings of animals that came to her in dreams, and in the early 1990s, her career took off after she received her first of 14 residencies at the Women’s Studio Workshop in the Hudson Valley, where she could continually refine her printmaking technique.

Amons’ eloquent, animistic prints soon made her a fixture on the arts circuit. Galleries from Portland to Rockland to Ellsworth exhibited her pieces, the Portland Museum of Art and the Farnsworth Art Museum purchased her prints, and significant group shows — like University of New England Art Gallery’s landmark Maine Women Pioneers exhibition series in 2013 — displayed her work.

Her success owes to a willingness to part with convention and an ability to evoke the mundane and the spiritual simultaneously. The late Portland Press Herald arts critic Philip Isaacson pronounced Amons’ prints “ethereal,” “dreamlike,” and possessed of a “lyricism I cannot assign to anyone else.” Her animal subjects, he wrote, “share a world that is a touch beyond the real.”

Amons’ style pushes her prints beyond easy categorization, into the realm of the inimitable: “I like the uncomfortable middle ground,” she says. “It’s not abstraction and it’s not realism, so there isn’t a pigeonhole to put you in.”