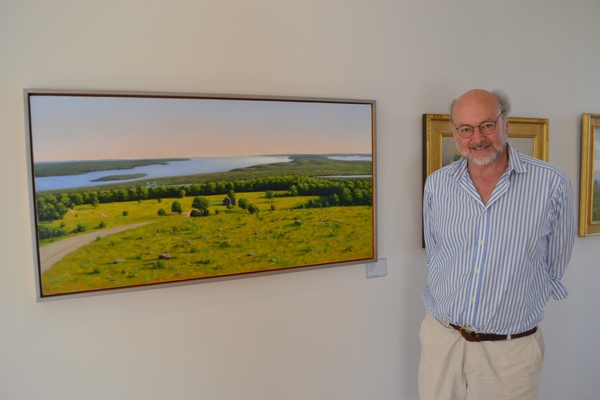 Joseph Keiffer at his solo exhibition at Courthouse Gallery.

Joseph Keiffer first came to Maine in the late 1970s with a visit to Alamoosook Lake in Orland.

In the years that followed, the realist landscape painter spent time in Somesville and other towns on Mount Desert Island, sailing on Somes Sound and hiking the mountains of Acadia.

Although he grew up in Rhode Island and lives in New York City, Keiffer said Acadia and other locations in Downeast Maine have been the most frequent subject of his works.

“I never really intended to do so many paintings here,” he said during a recent interview at Courthouse Gallery Fine Art in Ellsworth. “But it was a success, so I just kept with it.”

Courthouse Gallery is hosting a solo exhibition of Keiffer’s work, titled “Return to Acadia,” through Sunday, Aug. 18. The story of how Keiffer’s work came to be shown there, as it turns out, also has a lot to do with one person sticking with it.

Gallery owner Karin Wilkes said she first noticed Keiffer’s work seven or eight years ago while driving on Main Street in Ellsworth. Some of his paintings were displayed in the window of The Armoire, an antiques shop formerly located next to The Grand.

“The paintings stood out, even from the car,” said Wilkes. “Then one day, the shop was gone.”

Keiffer’s work stuck in Wilkes’ mind, but she didn’t know his name. Various queries and Internet searches proved fruitless until a customer who knew of Kieffer eventually gave Wilkes his name.

Fast-forward to the fall of 2012, when Keiffer got a call from Wilkes inviting him to do a solo show at Courthouse Gallery. That call led to “Return to Acadia.”

Keiffer credited The Armoire owner Francesca Zolotov for his strong interest in Maine as subject matter for his art. He met her in the 1990s while he was working for Sotheby’s in New York, and when she found out he was also a painter she asked to see his work.

That led to Zolotov selling some of Keiffer’s paintings in Maine in 1993, and a show of his work the next year. He went on to exhibit his work at The Armoire for more than a decade, until Zolotov decided to close the shop in 2009.

Zolotov died from breast cancer two years later. Keiffer described her as a “conspicuously polite and interesting woman,” and said she was also “quite a character.”

“We had more fun and laughs than I ever could have imagined with a business partner,” he said.

An essay by arts writer Carl Little in the catalog of Keiffer’s work notes that the artist “presents places and objects that have caught his eye — and which in turn catch ours.”

Many of those places will be familiar to anyone who has spent time in Hancock County: a view from Cadillac Mountain of the Porcupine islands in Frenchman Bay, or the panoramic view from the scenic overview on Caterpillar Hill in Sedgwick.

Little described Keiffer’s take on views such as these as “bright and balanced,” and Keiffer explained what he sees as the key element in such paintings.

“It’s about the light,” he said, noting that certain lighting can change the view seen from a particular vantage point from ordinary to extraordinary.

Reflecting again on the time he has spent in the area and the amount of work he has done here, Keiffer said he is “delighted to be home in Ellsworth again.”