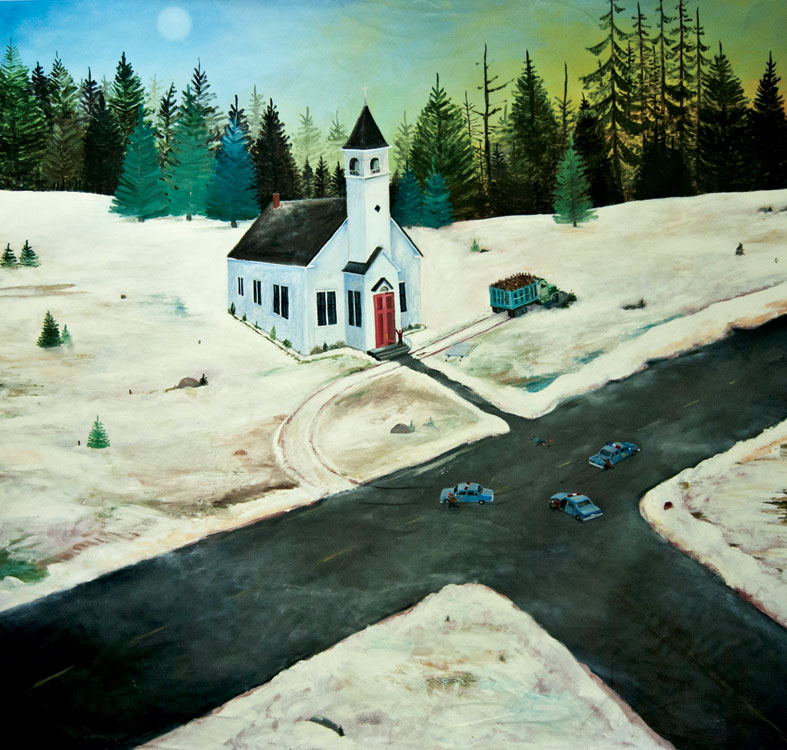 Nadeau of the North: Tapping into Franco-American heritage and a sense of Maine to create stories of life near the edge.

One day on a trip with his children to Mt. Desert Island, painter Ed Nadeau took a back road through Surry, just outside Ellsworth. As he drove along, Nadeau came across a small trailer dwarfed by a huge pile of firewood. He stopped the car, backed up and took a few photographs, struck by the immensity of the woodpile.

In the painting that resulted from that drive-by sighting, “Ready for Winter,” the woodpile seems Bunyanesque—as if the legendary lumberjack himself had toiled to build this bonfire-high stack of firewood. The image fits nicely into Nadeau’s northern vision: telling a tale with a few select elements, which in this instance represent survival, self-reliance and, well, gumption.

Later exhibited at the Courthouse Gallery in Ellsworth, “Ready for Winter” was purchased by a local collector, which pleased Nadeau. The fact that the owner of the woodpile brought his entire family into the gallery to see the painting after reading about it in the paper continues to put a smile on the artist’s face.

In the spectrum of Maine artists, Nadeau is something of a rarity: a narrative painter who mixes fact and fiction. Many of his canvases conjure stories, some drawn from family and personal experiences, others, in a manner of speaking, “ripped from the headlines.” The latter group includes one of his most charged pieces, “Death of a Young Man,” based on the death of Charlie Howard, a gay man who was thrown from a bridge in Bangor in 1984.

Nadeau read about the incident while living in Baltimore, Maryland, and felt compelled to respond. He noted that the canvas is also a metaphor for his father’s death (he died at 40 when Nadeau was 15). “I think that’s him hanging off that bridge as much as Howard,” said the artist.

The inspirations for Nadeau’s paintings are as varied as their subjects. “The Shortcut” shows a man in a snowy clearing waving for help, next to an “S.O.S.” formed out of pieces of wood. The image was inspired by the artist’s love of the 1950s TV show “Sky King,” which recounted the adventures of a rancher-pilot in Arizona who flew a small airplane and helped solve crimes and rescue people in distress. Another painting, “Umbagog,” draws on a story by Joyce Carol Oates about a minister who goes into the wilderness to preach to nothing.

Some of Nadeau’s most memorable paintings have a kind of purity of vision that at times brings to mind the work of outsider artists. “Mutiny of the Bounty,” for example, is a beautifully comic take on Maine’s lobster culture. It portrays a clutch of lobsters escaping from a delivery truck that has gone off the road.

Recently Nadeau has been enamored of bridges. These ubiquitous structures offer metaphorical resonance—“the idea of connectivity, crossing over,” he said—as well as the design element of an engineered horizontal shape cutting across the landscape. He also likes their “beautiful viridian green.”

“Night Bridge,” which depicts the span over the Passagassawakeag River in Belfast, has the feel of cinema noir. Under a full yellow moon, a lone car traverses the bridge, its headlights casting a cone of light. In a house to the right, visible through a window, are the bare legs of a woman in bed. This is the kind of voyeuristic perspective found in Edward Hopper’s paintings.

“A painting happens when I can’t get it out of my head,” said Nadeau, “when it sticks with me so long I can’t ignore it.” He likes to paint large, creating a “wall of paint,” yet he has also done smaller pieces. These include a series of paintings related to working on the land: a chain hooked around a stump, an axe carved out of tree stump, a bow saw halfway through a log, and stately compost piles frequented by crows.

At a talk at the Courthouse Gallery last summer, Nadeau was asked if he ever works from dreams. “No,” he quickly replied, “the natural world is crazy enough.” He went on to say that he feels the need to go within and not to be afraid of his ideas. He has achieved his goal, he said, when the process of painting takes over.

Ronald “Ed” Nadeau (rhymes with “meadow”) was born in Waterville in 1958, the oldest of four children. The family has strong French-Canadian roots on both sides. His mother’s first language was French. The painter takes pride in this heritage, which has shaped how he looks at the world.

Nadeau grew up in a house where making art was a regular activity. His mother’s father was “always whittling something,” and both his parents painted, in the kitchen. One of his mother’s canvases, a scene of a buffalo hunt, hangs in his house in Orono. In retrospect, Nadeau said her sense of pictorial space may have influenced the composition of some of his paintings, which often feature small figures in large landscapes.

In his senior year at Waterville High School, Nadeau showed his portfolio to an art teacher, Kitty Corty Cooper, who loved the work and helped him get into the University of Southern Maine. Feeling that he needed more focus, Nadeau transferred to Syracuse University to pursue illustration. He eventually switched to painting and ended up studying with the well-known figurative painter Jerome Witkin. Witkin works in a narrative mode, addressing various social issues in an expressive and often complex manner. Nadeau looks back at his study with Witkin as being crucial to his growth as a painter.

After obtaining his BFA from Syracuse in 1980, Nadeau took a few years off, got married, and ended up in Baltimore where he earned an MFA at the Maryland Institute College of Art. He remembers doing 3D plaster reliefs of objects such as chains, axes, and bolts. Painter Hermine Ford became his mentor. “When she would come into my studio,” Nadeau recalled, “she’d start laughing”—a response to the humor and honesty in his narrative paintings.

Sometime between college and grad school Nadeau received a copy of Carolyn Chute’s novel The Beans of Egypt, Maine in the mail from his mother. The 1985 book was acclaimed for its unfiltered representation of the back-road life of Mainers. Here was the “real Maine,” many critics said.

Chute’s book had a profound impact on Nadeau. “I knew what I wanted to paint,” he noted, “but until I read that book I didn’t really know how to paint it.” His first post-Beans canvas, “Misery Ridge,” was inspired by a story from his grandfather about a railroad accident in the north country in which two men on a railroad pump car were hit by a plow train in the middle of winter. The canvas depicts the aftermath, with equipment strewn across the ridge and a man face down in the snow.

This painting, which was Nadeau’s first narrative piece, changed everything. It was featured in the Baltimore Museum of Art Biennial and received critical praise. The painting’s positive reception led to a two-person show with Josef Schutzenhofer at the School 33 Art Center in Baltimore.

Like novelist Ruth Moore, who wrote her first Maine coast novels while living in California, Nadeau found himself creating images of his home state as a resident of a city far away. “It was almost like I needed distance in order to see what I could tap internally,” he noted.

The stories were a part of him, told by relatives, but also experienced firsthand by the artist. For a time Nadeau’s father had run a chicken farm in Deer Hill, a hardscrabble community near China, Maine, that featured an assortment of characters from Maine’s “underbelly,” such as deer jackers, wood stealers and the like. Like Chute, Nadeau did not intend to poke fun at these individuals and their lives; he wanted to tell it like it was.

Critic Britta Konau has said that Nadeau avoids condescension and caricature in his depictions of Mainers by maintaining “an authorial distance.” The artist acknowledged the risks even as he confirmed his desire to make work that makes people think about the human condition in all its tragic-comic complexity.

Nadeau moved back to Maine, to Bangor, with his family in 1994. He worked at Bangor Frameworks, taught a few classes at Husson College and exhibited his work at the Clark House Gallery. He eventually met James Linehan, a long-time art professor at the University of Maine, and got a foot in the door there.

Now an adjunct professor at UMaine, Nadeau teaches 2D design, drawing, and painting, as well as an occasional capstone project for seniors. Capstone involves the business side of art. Students must create an art show, from press release to wall labels. “It sets up a whole professional dynamic for the students,” Nadeau said.

The artist lives on a quiet street off the main drag in Orono, in a two-story house with a small backyard. The downstairs is arranged for company and cooking (Nadeau specializes in fresh-dough pizza), but mostly for making art. On a recent chilly December night, an easel set up near the woodstove just off the kitchen featured a large graphite and charcoal drawing of a bridge. Another bridge piece was under way in the attached studio, and various other works were hung and stored all around.

After he and his wife divorced in 2005, Nadeau bought this house to be near his two children and the University of Maine where he has taught since 2000. His daughter, Samantha, 17, is a champion canoeist who attends Orono High School. His son, Matthew, 23, is a recent Colby College graduate who loves film and writing.

Mention of his daughter reminded Nadeau of another series of his titled “Americans on the Fence.” A few years ago Samantha and a friend wanted to go to the Bangor State Fair. The artist didn’t want them going alone, so he went with them. While waiting for them outside the fairgrounds, he noticed people standing by a fence on a ridge, gazing at the goings-on at the fair. The silhouettes of these figures against the bright lights appealed to him and he ended up painting several versions of the scene.

“Once again, it’s that idea of Americanism,” Nadeau said. Indeed, many of his paintings tap into a distinctly American vision, full of drama and humor, as well as the quiet beauty of things we sometimes overlook, such as men and women, teens and children leaning on a fence taking in the spectacle of Ferris wheels turning against the evening sky.