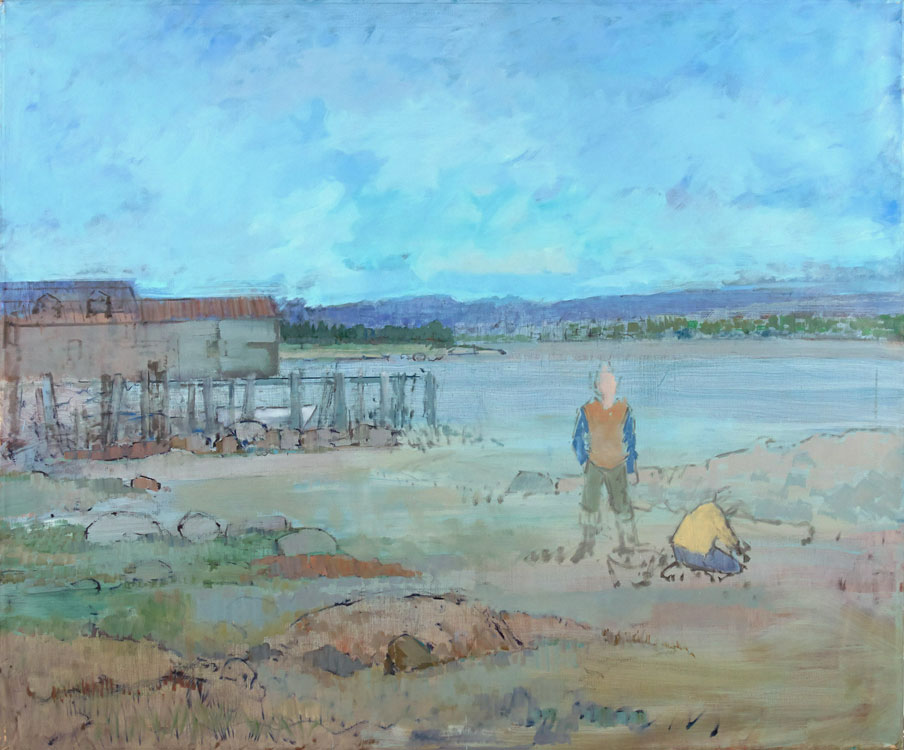 Clam Diggers in the Fog by John Heliker, 1980, oil on canvas, 50 by 60 inches. Heliker was a New Yorker who summered in Maine.

ALTHOUGH I GREW UP IN NEW JERSEY, I’ve been going to Maine since I was 10. In the very beginning, actually, I was not quite in Maine. The place we visited, Star Island, is part of the Isles of Shoals, a small group of rocky islands about nine miles out fromPortsmouth, New Hampshire. But the state line goes right through tiny Gosport Harbor, and we frequently rowed over to neighboring Smutty nose and Appledore islands where I first put my feet down in Maine. But it hardly mattered. The islands have a similar character—stark, rugged and windswept. Think Heathcliff’s moor with crashing surf and the ding-dong of a bell buoy.

We returned summer after summer, so this kind of place was imprinted on my sensibilities before I was old enough to have sensibilities. It easily escaped my youthful attention that the then-nearly-deserted Appledore, with its desolate World War II observation tower, had been a late-19th-century art colony. A poet named Celia Thaxter, whose brothers ran a resort hotel there, attracted prominent writers and painters to her cottage salon. Among them, the painter Childe Hassam found endless material for paintings in the rocky ledges, blue waters and, especially, in Thaxter’s fabled garden. You can see these paintings today at the Metropolitan Museum of Art and any number of other museums.

Hassam was not the first artist to find inspiration in Maine and was certainly not the last. Winslow Homer moved to Prouts Neck in 1883 and, living just 75 feet from the ocean, painted scenes of sailors and fishermen in earnest and sometimes dangerous engagement with the sea. Robert Henri, leading member of New York’s Ashcan School, went to Monhegan Island—20 miles off Boothbay Harbor—in the early 20th century and was so moved by it that he encouraged three of his best students—Rockwell Kent, George Bellows and Edward Hopper—to come up there also.

All profited from the experience, but none so much as Kent, who later wrote that the island’s scenery “was enough to start me off to such feverish activity in painting as I had never known.” He also fell in love with the fishing community. “I never in my life saw such a fine kind-hearted set of people,” he wrote. “I’d like to be one of them.” He made good on his wish. Soon he had built a house and, in addition to painting, was working as a fisherman, roofer and well-driller.

And then, of course, there are the three generations of Wyeths—N.C., Andrew and Jamie—who alternated between the Pennsylvania countryside and Maine, where they did the same kind of tightly rendered paeans to stones, grass and weathered barns. John Marin’s modernist watercolors of Maine waters sing with light and animation. Fairfield Porter, the poet of quiet Sunday afternoons where dogs lie in the shade and perfect blue skies meet perfect blue seas,spent his summers on an island in Penobscot Bay.

SO WHAT IS IT ABOUT MAINE?

Karin Wilkes, who with her husband, Michael, runs the Courthouse Gallery Fine Art in Ellsworth, has three quick answers to what draws artists to Maine: “The light up here is spectacular. Also, it’s practical—if you’re not buying on the ocean, it’s an affordable place to live. And there are not so many distractions in winter. Artists get a lot of work done.” She also points to the Skowhegan School of Painting & Sculpture, about 50 miles west of Bangor, which has a prestigious nine-week summer program that draws teachers and students to the area year after year. “They fall in love with the place and end upcoming back,” she says.

Fair enough. The air is clear, there are long, uninterrupted vistas and, yes, the light, like all seashore light, is lovely. And Maine, because of a glacier-shattered, convoluted shoreline has more coast than much bigger states—some 3,500 miles of it. But light alone is not enough to explain the phenomenon. Neither are the picturesque harbors and fir-tree covered islands that have nurtured plein-air painting societies from Portland to Castine.

For one thing, the artists who come to Maine transcend any artistic movements. In the early 20th century, so many artists flocked to Paris to be impressionists that visitors could hardly see the Seine for all the easels and straw hats. But Maine isn’t associated with any one style. Hassam was an impressionist. Kent merged regionalism with precisionism. Marsden Hartley, born in Lewiston, waded in all the modernist currents and turned out landscapes that draw on American Indian art, expressionism, cubism, surrealism and symbolism. Even a pop artist such as Alex Katz, whose style seemed wedded to Manhattan and the language of commercial advertising, began summering in Maine (via Skowhegan) and turned his flat, poster-like style to spruce trees, creeks and kids sunbathing on rafts.

I would argue, however, that the essence of Maine art is not really a sunny one. There are plenty of pretty coastal areas in other states that haven’t nurtured so much art.

To understand it, I think, you have to go back to its roots in the so-called Hudson River School and its founder, Thomas Cole. Cole came to Mount Desert Island in the 1840s in search of scenes charged with what he called “the sublime.” The sublime is probably best explained by a line from the German poet Rainer Maria Rilke, who wrote: “Beauty is the beginning of terror we’re just able to bear.”

Cole’s paintings of the heaving ocean and granite cliffs of Frenchman Bay capture a dangerous, hostile side of nature. It is the same reality that Henry David Thoreau encountered on Maine’s Mount Katahdin, which he visited on a break from his two-year sojourn at Walden Pond. In contrast to benign Walden, Katahdin horrified him with a “vast, titanic, in human nature.”

Maine has its dark side. Its conifer woods are, for the most part, too dense and obstructed by fallen trunks, splintered branches and gnarly roots to make for idyllic strolls. The cold waters of its coast yield no sand to soften the meeting of sea and land. The moodiness of its weather and terrain are like the tantrums of the Old Testament God. They make the sweetness of creation all that much sweeter when the sun breaks through the clouds.

Who knows if Edward Hopper would have cultivated that vague sense of menace that lurks in his landscapes had he not spent formative summers on Maine’s Monhegan Island, Ogunquit and Cape Elizabeth? You can see it in the famous paintings he did of the lighthouse at Two Lights, each of which, through the juxtaposition of stark light and deep shadow, of distance and for bidding height, is both beautiful and slightly spooky.

Marsden Hartley’s Stonehenge-like landscapes, his jumbly hills, twisted roads, up-tilted lakes and zeppelin-like clouds range in feeling from uneasy dreams to outright nightmares. One of the most famous American paintings, Andrew Wyeth’s “Christina’s World,” is a picture of a crippled woman stranded in a Maine field, too far from the house to make her voice heard.

Even essentially good-natured artists such as Marguerite Zorach and Karl Schrag, both of whom had houses on Deer Isle, another Maine art colony, were in touch with the dark side. Zorach, whose paintings generally embody a Fauve-like joy, painted the precipitous Deer Isle Bridge as if it were the connection to a cockeyed alternate reality. Schrag, who must have lived well off the main road, fell in love with the deep darkness of rural night and made lyrical nocturnes out of moonlight through the window and star-studded backyard skies.

Acadia National Park on Mount Desert Island is celebrating its centennial this year, and the Courthouse Gallery, which occupies a pair of 1830s Greek revival government buildings, noted the anniversary with a show, “10/100 Painting Acadia,” that also marks the gallery’s 10th anniversary. The show’s 29 artists are a mature and accomplished bunch. Many of the painters have that modernist talent for gracefully abstracting reality with bright blocks of color. There are the expected up beat scenes of children swimming, lobster boats in harbor and pastures at twilight. But there are also, I’m glad to say, moody and idiosyncratic images, such as Judy Belasco’s gray and foggy coastal scenes, Paul Hannon’s lonely street corners under uncertain skies and Alison Rector’s hushed and dimly lit library interiors, where, you get the feeling, something strange is about to happen

In addition to its stable of contemporary artists, the gallery represents the estates of photographer Berenice Abbott and painters John Heliker, Schrag and Gretna Campbell. Campbell was part of an art colony on Cranberry Isle that has mostly been displaced by gentrification. Through the alchemy of oil painting, Campbell’s loose, expressionist brushwork makes rushing water and solid rock seem to be made of the same fluid stuff.

I’m still going to Maine, though now to the Blue Hill Peninsula rather than the Isles of Shoals. E.B. White wrote about the uplifting feeling he got on the long drive up from New York when he crossed the Piscataqua River into Maine. I know what he means. But three hours or so north, when the advancing fir trees seem to be leaning in over the high-way, I pick up on that other Maine vibe and I’m reminded that this is also the state of Stephen King.

Columnist John Zeaman is a freelance art critic who writes regularly for The Record and Star Ledger newspapers. His reviews of exhibits in New Jersey have garnered awards from the New Jersey Press Association, the Society of Professional Journalists (New Jersey chapter) and the Manhattan-based Society of Silurians, the nation’s oldest press club. He is the author of Dog Walks Man (Lyons Press, September 2010) about art, landscape and dog walking.