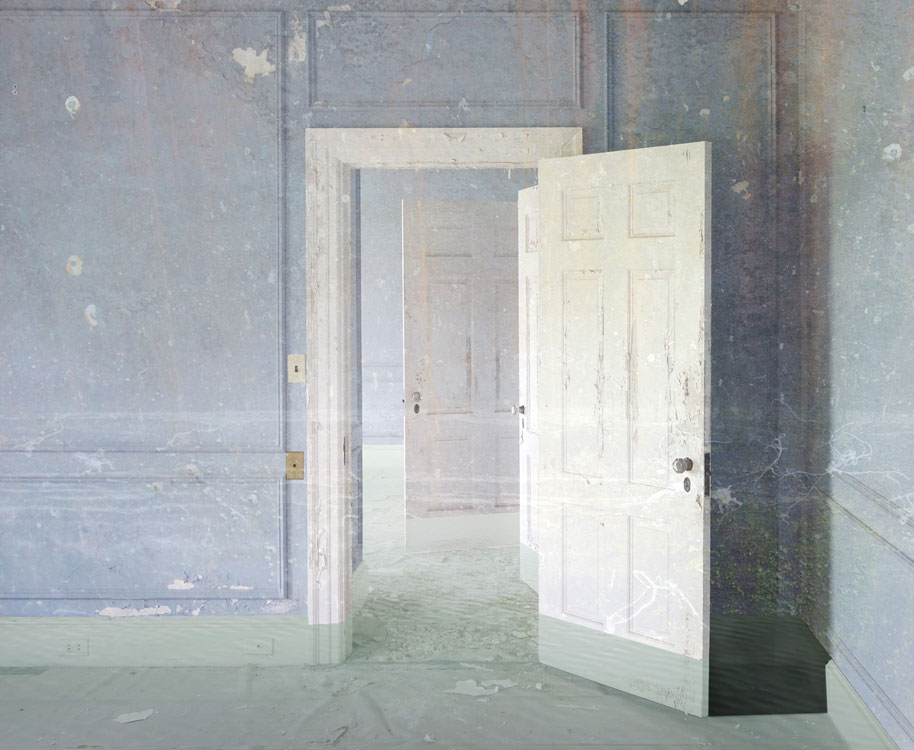 Running until 31 August 2022, Between Two Worlds is an evocative showcase of two photographic artists who have a strong connection to the poetics of coastal spaces. Jeffery Becton and Andrea Hamilton are both interested in the intersection of land and sea, memory and place. In this exhibition, the pair highlight the emotional potential of our environment.

Jeffrey, a pioneer in the field of fine-art photography who lives and works in Deer Isle, Maine, expresses these thoughts and observations via seamless, painterly montages. Images layer up to bring us waves crashing through hallways and shimmering rooms that appear, even if not always literally, to be submerged in some way.

The architecture of vintage New England houses, many of which are part of Jeffery’s personal story, feature prominently in his work for Between Two Worlds. Flooded with watery light, these uncanny images see the walls of these ravaged homes peel like skin, prompting the viewer to meditate for a moment on generational fade and what might have been lost.

To learn more about his life story, approach to photography and the work on display at AH Studios, we talked to Jeffery as he headed across the Atlantic to London in time for the show’s opening.

You’ve received an MFA in graphic design, but what made you want to move into photography?

The truth is I wanted to go to art school, but as I was majoring in history, I had only taken two art classes as an undergraduate at Yale, so I didn’t have a portfolio to submit. However, it occurred to me that the graphic design department might provide me with an art education of sorts, and they accepted me! Photography was required, and it came naturally to me. We were fortunate to have mentors such as Jerry Thompson, a protégée of Walker Evans, who encouraged me to carry on – and so I did!

How has your approach to photography changed and developed over the years?

I moved from doodling around using a small format to a medium format, at which point I became interested in black and white portraiture using a Rolleiflex. From there, I began using a variety of cameras and soon began shooting in colour. As the technologies changed, I adapted, and when digital came along, I embraced it: from the earliest Nikon Coolpix to my iPhone 13 pro max with multiple cameras in between. My current favourite digital camera is my Sony A7R IV which produces a 55-megabyte file.

This is your first ever exhibition outside of the US. What made you want to come to London, and how have you found it?

I came to London because of the fine art photographer Andrea Hamilton, who discovered my work at the Steve Koman Gallery, which also represented her in Vero Beach, Florida. Seeing how our mutual interests overlapped, she suggested a collaboration, and after numerous conversations, she convinced me to come back to London. I have loved every minute of my time here in London, especially this hidden gem of a street where AH Studio is, full of creatives, artisans and a thriving community she is so generous towards.

What is it about Maine that makes for such a good photographic study?

The Maine coastline is 3,000 miles long, and it is spectacular. I love the sea and recording every aspect of it, but I especially love the coast: the rugged rock-bound edges, the presence of many harbours to shelter in, the light on the water at different times of day, tides, seasons and weather. Equally, the multi-generational summer homes along the shoreline pull on my imagination. (My parents built their summer house on the coast in Blue Hill, Maine, in 1947, the year I was born. We always summered there as a family. In 1976 I decided to move to Deer Isle nearby, and live there full time.)

How has Maine itself shaped you as a photographer?

Aside from the ocean itself, my greatest inspirations are the intertidal zones – those shifting, liminal spaces – and the patinated surfaces found therein, created by both the growth and the decay that takes place where land meets the sea.