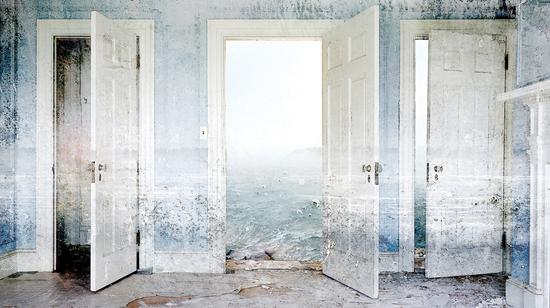 In his studio loft overlooking Long Cove on Deer Isle, artist Jeffery Becton is getting used to having more room. He recently moved into the space after working in a smaller studio in his Deer Isle home for years, he said during an August 17 interview with Island Ad-Vantages.

The change has come at the right time because Becton has begun to produce larger works of art, he said, in which the visual compositions contained can change, depending upon the viewer’s perspective and distance from the art work.

“Being able to engage the work at different scales creates a more encompassing experience,” Becton said.

He specializes in crafting digital photomontages, or images in which multiple scenes and visual elements are layered through the use of computer software. In Becton’s case, the components are derived most often from photographs of landscapes and interiors of old buildings. The results are surreal in nature, where the subject matter not only seems to conflict, but also dimensions themselves are pushed and pulled; however, the images are usually inviting and even calming to the viewer, as the natural land- and seascapes soften and even mingle with the aging and worn interiors of antique homes.

Becton has been a pioneer in his use of new imaging technology in art, but he hasn’t done so out of any desire to achieve the status of being ground-breaking for its own sake. Rather, he is guided by a need to push the boundaries of his own vision of surreality, and advancements in technology and multimedia have allowed him greater means through which to explore such possibilities.

“I feel my way into a picture,” Becton said. He doesn’t set out to create a specific image but instead arrives at a complete work through experimentation and instinct, adding layers and pushing ideas as far as they will go. “It keeps getting better, or it’s done,” Becton said, and he strives to create work that resonates and evokes an emotional response. Becton attended Yale University during the 1970s, studying history as an undergraduate before completing a graphic design program at Yale School of Art, he said. He was never interested in pursuing graphic design as a career, however; he was just interested in creating pictures.

“[Graphic design] seemed the best way to get the education I needed,” he said. He picked up photography and discovered he had a knack for finding visual compositions in his surroundings, and under the tutelage of Alvin Eisenman, Becton developed a keen interest in the technological side of art, assisting Eisenman in setting the type on Yale’s mainframe computer in 1974. While he pursued black and white photography after completing his formal education, his interest in computers grew as the technology advanced. He lauded the release of the first Mac computer by Apple in the early 1980s for its visually user-friendly interface, but printers were of the daisy wheel variety at that time, Becton said. But Becton embraced even those crude technologies and as laser jet printers were developed and became available, he was invigorated by new possibilities.

“I never saw it as a threat,” he recalled, while others did: “A whole large group of photographers had lost their way.” As a photographer, he had been used to creating work that had to “hold its own” among large paintings in group shows, he said, so as large-format printers were developed, his work co-evolved with the technology.

Becton moved to the Island in 1978, he said, and the natural, rugged surroundings and the effects of distance and water on perception have only furthered his eagerness to blend images into surreality. “I haven’t been a straight photographer since I started using Photoshop,” he said, which he quickly began to use creatively, well beyond the limits of touching up photographs. He employs the precision tools of photography and image-editing software to create visual ambiguity, he said, where the viewers of his work easily arrive at their own interpretations.

“I’m careful not to lead anyone too far down any given path. It’s not satisfying emotionally to have the question answered for you,” he said.

Becton has been more recently drawn to clouds, which “are landscapes of their own,” he said, and he has also been enthralled by complex surfaces, such as the hull of a wrecked ship—with all of its peeling layers of paint over bubbling spots of rust and growths of barnacles, both living and dead.

His work has been shown in many exhibitions and featured in national and international publications. It can also be found in private and museum collections, such as those of Bates College of Art, Farnsworth Art Museum and Portland Museum of Art, to name a few. His work was recently exhibited at Courthouse Gallery in Ellsworth. For more information call 207-667-6611, or visit courthousegallery.com. Check the publisher’s website at marshallwilkes.com for upcoming speaking engagements by Becton.