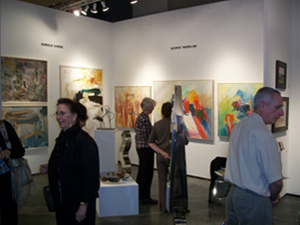 Three years ago, Courthouse Gallery in Ellsworth owners Karin and Michael Wilkes were on vacation in Florida and stumbled upon Art Palm Beach, an annual, international art fair. The Ellsworth couple mingled with artists, collectors and curators as they viewed contemporary art from around the world.

This year, they’ve decided to be the only Maine gallery displaying art at the fair from Jan. 20-24 in Palm Beach, Fla.

“These fairs are a huge trend for galleries who are in the outlying areas like us,” Karin Wilkes said. “This time of year, we don’t really have an art season; it’s over pretty much in October in this part of the state anyway.”

Art Palm Beach has become one of the most influential contemporary art fairs on Florida’s coast. The 2011 fair will gather 75 of the world’s most prestigious galleries, representing 1,200 artists, at the Palm Beach County Convention Center. Courthouse Gallery will occupy Booth 612.

The Wilkeses plans to highlight their “Abstract Expressionism: 1950s and 1960s” exhibition featuring Harold Garde, Stephen Pace and George Wardlaw, which was displayed at their gallery in September and received a lot of interest in Maine.

“We also want to bring some of our best Maine contemporary artists,” Karin Wilkes said.

“It’s pretty cool to be the only Maine gallery there, and we’re definitely bringing some Maine work that says ‘Maine,’” Karin Wilkes said.

Within their collection, they have “Steve Banding Lobsters,” a 40-inch-by-72-inch abstract painting of lobstermen banding lobsters by Stephen Pace, and “Tree Length,” a new, 68-inch-wide painting by David Graeme Baker, of three children playing in front of tree-length logs.

The fair accepts galleries that have experience in representing and promoting artists through group exhibitions, one-person shows and publications involving extensive research into the artists’ backgrounds.

“Courthouse has a long history of representing living artists as well as deceased artists,” said Lee Ann Lester, Art Palm Beach owner and manager. “They have an incredibly high caliber of artists that they represent.”

Though many Maine artists have participated in the fair over the years, Lester doesn’t remember a Maine gallery ever participating until this year. This year there will be exhibitors from Paris; New York City; London; Tel Aviv; Heusden an de Maas, the Netherlands; Barcelona; and Moscow.

“Fairs have become an extension of the commercial galleries to collectors, museums, curators and the press,” Lester said. “They’ve really become not only a cultural icon to the city, but they perform a function for greater art education and understanding of the public, because you can see a thousand works of art, selected works by top galleries, all at one time.”

“To have your artwork in front of 20,000 people” I’m not sure how many people come through our door in the summer, but that’s a lot of people,” Karin Wilkes said.

She and her husband will drive a trailer of art down to the show a week before it starts, and their assistant director, Jeff Dreher, will follow by plane a week later.

“We’ve been wanting to try [to participate in the fair] for a long time,” Karin Wilkes said. “With the economy and everything, it wasn’t a good time. But there had been a lot of good signs: the recent holiday season, the stock market, the tax incentivesc— hopefully, people will see that as a reason to purchase art.”

“The audience is a select audience going to it because they like art. You have a targeted market,” she said. “They say you have a year’s worth of traffic in four days, so we’re hoping we’ll have some success.”

Abstract expressionist painter Harold Garde, who spends his winters in Florida and summers in Belfast, will be at the fair with his family. And Courthouse Gallery sculptor Cynthia Stroud also will be at the fair, since she will be participating in a boccie tournament in the area.

Suzette McAvoy, director of the Center for Maine Contemporary Art in Rockport, will also attend the show.

“I think we’re just at the point that we want to give it a try,” Karin Wilkes said.