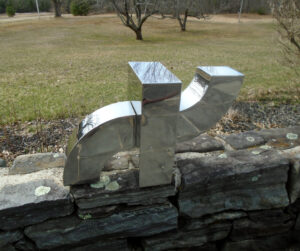 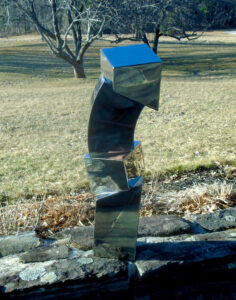 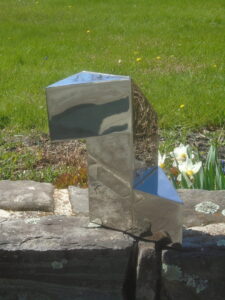 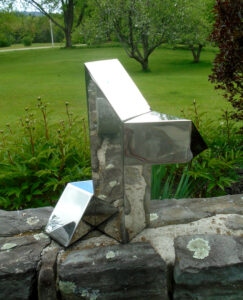 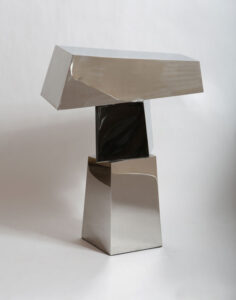 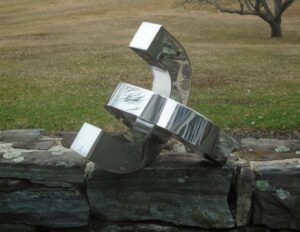 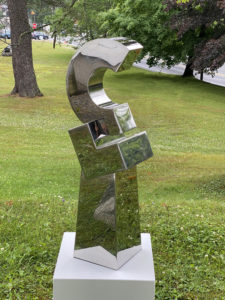 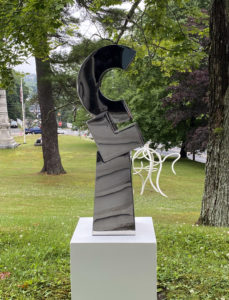 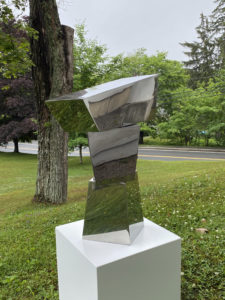 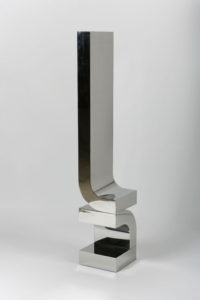 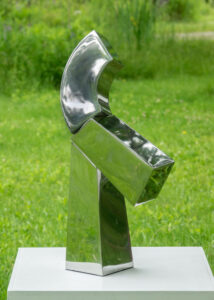 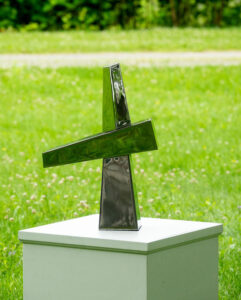 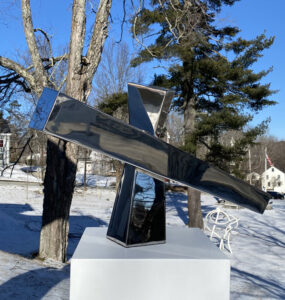 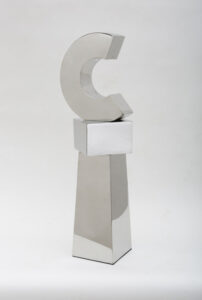 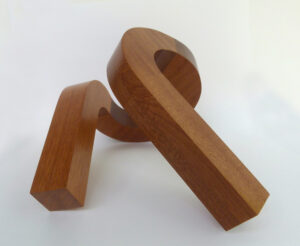 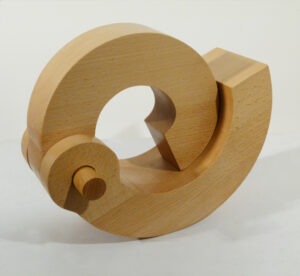 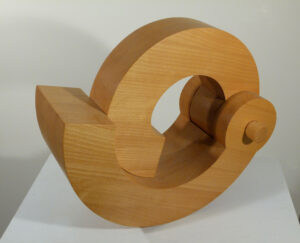 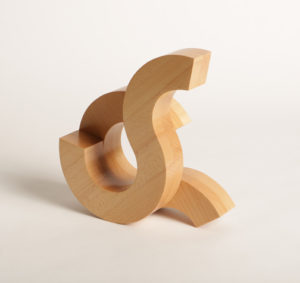 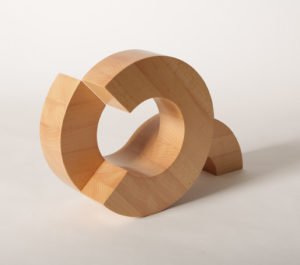 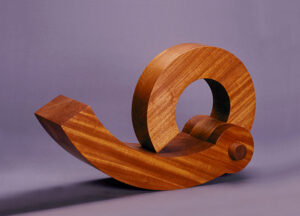 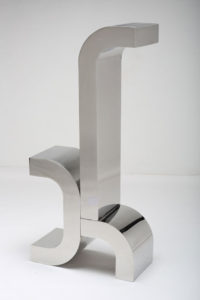 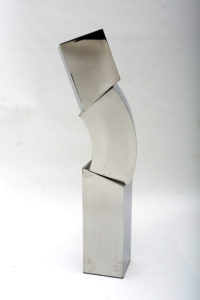 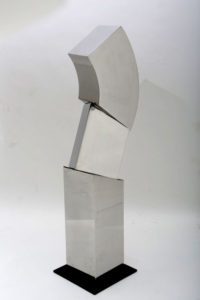 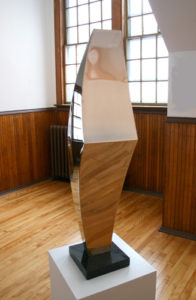 Stephen Porter’s stainless steel sculptures are meant to be outdoors—in fields, parks, or gardens—where his highly polished surfaces can reflect the atmospheric moods of the environment. Here, the mirrored surface takes advantage of the changing light, turning cold, sterile steel into a vehicle for personal reflection.

Although Porter works in polished stainless steel, bronze, and laminated hardwoods, he favors the natural quality of stainless steel, an alloy that doesn’t rust or tarnish, making it perfect for outdoor use. Stainless steel also suits his preference for a smooth polished surface, a commonality throughout his work.

Porter is attracted to basic geometric forms and credits primitive art as a major influence. He uses only two forms, circles and cubes, yet he never seems to exhaust the possibilities for intriguing design. Circle 34, an exquisite piece of workmanship and design, binds together two open circles, question marks if you will, in opposite directions, creating a multitude of surfaces, angles, and elevations that become inherently more complex when they reflect their environment.

Porter’s minimalist approach to design favors abstract, non-literal form. His appreciation for exquisite form is evident in the modern influences he names: Brancusi, David Smith, the Russian Constructivists (Rodchenko, Tatlin, and the Stenberg brothers), Henry Moore, Jacques Lipchiptz, and Barbara Hepworth. Porter begins each sculpture by making a small maquette, or model, from wood, a process that allows him to visualize his ideals and test his designs. He knows his craft well through a lifetime of sculpting and through his career as a Professor of Art at Penn State University where he taught sculpture for 29 years.

Porter’s first serious forays into making sculpture were Brancusi-inspired rough carved wooden totems, several of which burned in a fire that destroyed his studio in Searsmont during the winter of 2009. Porter has since built a spacious modern studio with separate rooms for woodworking, metalwork, and welding. This unfortunate loss was devastating nonetheless, and several irreplaceable steel sculptures still sit charred in a corner.

Three years ago, Porter began to explore granite as a medium, and this too he polishes to an ultra-smooth finish. In the recent Black Circle Series, Porter combines polished granite with polished stainless steel. Here, the juxtaposition allows the components to become introspective. In Black Circle 1, a stainless-steel cylinder pokes through a hole in a black granite disc. Another large round hole carved into the granite reflects onto the stainless-steel cylinder, morphing into an oblong circle.

Another granite series, the Stone Circle Series, is comprised of perfectly polished granite discs with subtle planes that define a simple, yet methodically constructed and weighted sculpture. Stone Circle 1 and 4 are self-propelled and will roll across the floor like a ball under their own power. For a reserved man of few words who can appear aloof, Porter’s playful approach is a pleasant surprise. His inner boy has appeared before, however, in his laminated wood series, Rotate, with their movable parts, and one can’t help but notice that the rows of small wooden maquettes in his woodworking shop look and feel more like toys than models for serious art.

Porter grew up in a family of artists. His father, Eliot Porter, was a noted photographer and the brother of painter Fairfield Porter. His mother, Aline Porter, was a painter and came from a family of artists. Porter’s maternal grandmother was a well-known Boston painter and his maternal grandfather an accomplished Boston architect. Raised in Santa Fe, New Mexico, Porter learned to use woodworking tools in his father’s woodshop early on. There, his father taught him to appreciate fine workmanship. By the age of 10, Porter made his first sculpture from volcanic pumice, and sold it at the Burro Alley Gallery in Santa Fe.

Betty Parsons, an art dealer who helped start the careers of Jackson Pollock, Mark Rothko, Clyfford Still, and Ellsworth Kelly, among others, was a good friend of Porter’s mother. Parsons followed Porter’s efforts in sculpture, and when he graduated from Cornell, she offered him a show at her New York gallery.

Porter received his BA from Colorado College and his MFA from Cornell University. He learned to weld at Cornell, and it was here that the circle form became all-consuming. “I did a lot of circles at Cornell,” Porter said, exasperated, as if the frenzied exploration were still fresh in his mind. Reflecting back on a lifetime of making sculpture, Porter sums up his life as an artist: “I like to work with my hands, and I came from family of artists. There was never any question I would become anything other than a sculptor.”