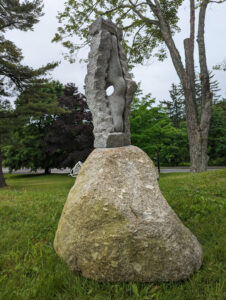 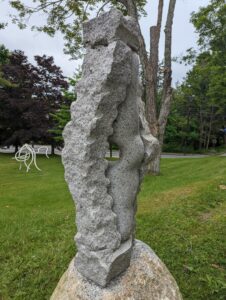 Jesse Salisbury creates large-scale stone sculptures from granite and basalt found in Down East Maine. Influenced by Japanese stone splitting and carving techniques, Salisbury hand splits, and then reassembles the granite to bring out the stone’s inherent movement, raw power, and natural beauty.

Salisbury manages to squeeze, press, or twist massive stone into new forms that help the viewer see the stone’s natural synergy. As one walks around Inner Motion, in particular, the stones twist like wet clothing being wrung out. The pent up energy creates a commanding gestalt that belies our preconceived notions about stone.

Born in Steuben, Maine, Salisbury began to study sculpture at the age of twelve from a local sculptor. His family eventually moved to Toyko, Japan, where he attended high school and became fluent in Japanese. Salisbury went on to study Bizen wood-fired pottery in Japan before returning to the United States where he graduated from Colby College with a major in East Asian Studies and a dual minor in Chinese and Art.

In 1997, Salisbury returned to Japan to work with sculptor Katsumi Ida as his assistant. The following year he attended a symposium in Japan and met sculptor Atsuo Okamoto, a master at splitting stone. In 2004, Salisbury was a participant in the Nasunogahar International Sculpture Symposium in Japan, where he met his future wife sculptor Kazumi Hoshino.

In 2010, the Farnsworth Art Museum selected two of Salisbury’s mammoth sculptures for their 2010 exhibition Four in Maine: Site Specific, which highlights sculptures created for specific spaces within the museum. Salisbury has participated in juried sculpture symposia in Korea, Japan, New Zealand, Egypt, and the Unites States. In 2007, he founded the Schoodic International Sculpture Symposium, an ambitious ten-year biennial held at the Schoodic section of Acadia National Park. He also initiated an international sculpture symposium at the Round Top Center for the Arts in Damariscotta, Maine. Salisbury’s work is included in private and public art collections. He lives in Steuben with his wife, Kazumi, and their son Ren.