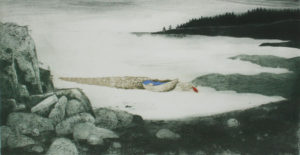 Charles E. Wadsworth (1917–2002) was born in Ridgewood, New Jersey. He enrolled at The American People’s School in New York in 1937. Here, he studied painting under Carl Nelson, who eventually joined Wadsworth and the growing community of artists on Great Cranberry Isle. Wadsworth later attended the Art Students League in New York where he studied with two artists and mentors, Kimon Nicolaides and Yasuo Kuniyoshi.

Wadsworth is considered to be the first of the late twentieth century Great Cranberry Isle artists. He bought his first piece of land on Cranberry in 1947, two years after marrying writer, Jean Howard. Wadsworth spent nearly every summer painting, printmaking, and writing poetry on the island. In an excerpt from Views From the Island, Wadsworth wrote: “So far as I know, the only way you can be native to a place is to be born there. I plead a nativity of the heart. My attempt has been to see one island through the twin lenses of wonder and delight. I have made an act of praise using the dual mediums of print and verse. Neither delight nor wonder is currently fashionable in the arts. But it takes a svelter figure than mine to turn the intellectual somersaults required if one wants truth.”

Wadsworth works in the collograph-intaglio medium, a relatively new medium where the plate is produced much like a collage by using a variety of polymer glues and aggregates to build, and then incise, the surface. The result is very rich and varied texture with an enormous range that seems peculiarly suited to a person whose bent and training is that of a painter.

Wadsworth’s work has been represented at the Whitney Museum, the Pennsylvania Academy of Fine Arts, the Boston Museum of Fine Art, and the National Gallery, among many others. He has been awarded numerous prizes from Jordan Marsh Exhibition (1951), Boston Art Festival (1952), National Museum of Arts and Letters (1954), and Cambridge Art Association (1954).