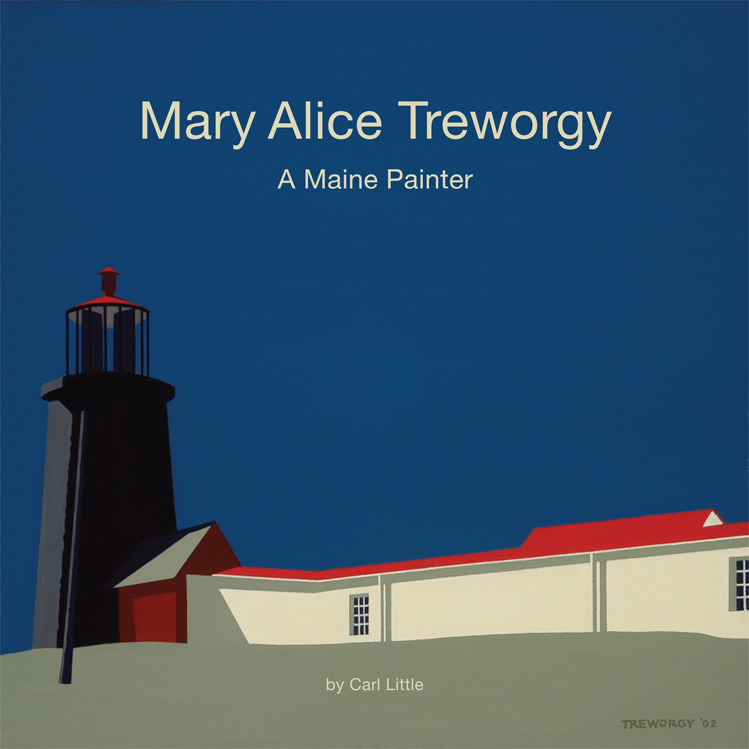 Courthouse Gallery Fine Art is pleased to announce that Marshall Wilkes, a publisher of fine art books affiliated with the Gallery, has released their latest book—Mary Alice Treworgy: A Maine Painter by Carl Little. The Gallery will host an official book launch in the spring of 2022 (TBA). For more information please email karin@marshallwilkes.com.

Mary Alice Treworgy: A Maine Painter follows the artistic career and life of Mary Alice Treworgy, a modern-day precisionist who found inspiration on Monhegan Island and elsewhere in Maine and New England. Author Carl Little traces Treworgy’s journey in art, from a childhood infatuation with paint to studies at the Massachusetts College of Art, a career in graphic design, and critical notice as a painter.

“Mary Alice Treworgy’s painting Mrs. Wilson’s Barn–Morning, is an architectural presentation that delights me. Through notation, it reduces a parade of forms into a near-abstract pattern and then appoints it with an explosive yellow automobile.” —  Philip Isaacson, Maine Sunday Telegram, 1992

Born in Baltimore in 1936, the great-granddaughter of board game creator Milton Bradley, Treworgy lived for much of her life in Brunswick, Maine, where she raised her family and maintained a studio. Treworgy studied with noted painters, including Joseph Nicoletti, Thomas Cornell, and Wolf Kahn, and attended the Vermont Studio Center on several occasions.

In 1991, Treworgy discovered the work of the American precisionists, which further sharpened her geometric approach. Her work was shown at Maine Coast Artists and numerous galleries, reviewed by critics Philip Isaacson and Pat Davidson Reef, and juried into three biennials at the Portland Museum of Art.

An introduction by Episcopal minister and author Frederic Stecker offers a personal account from his perspective as a member of the Monhegan summer community and as a collector of Treworgy’s paintings. “Mary Alice has taught us well,” he writes. “She paints the object’s essence; there is really more to see and to understand if you remove the distractions.”

Carl Little Born and raised in New York City, Carl Little holds degrees from Dartmouth, Columbia, and Middlebury. He directed the public affairs office and the Blum Gallery at College of the Atlantic before becoming director of communications and marketing at the Maine Community Foundation in 2001.

Little is the author of more than 30 art books, including Paintings of Maine, The Watercolors of John Singer Sargent, and Edward Hopper’s New England. He has written monographs on a number of artists, including Dahlov Ipcar, Beverly Hallam, Joel Babb, Francis Hamabe, William Irvine, Jeffery Becton, Wendy Turner, Philip Barter and Philip Frey. His book Eric Hopkins: Above and Beyond won the first John Cole Prize from the Maine Writers & Publishers Alliance in 2012. He edited his brother David Little’s Art of Katahdin and co-authored with him Art of Acadia and Paintings of Portland.

Little writes for Art New England, Hyperallergic, Island Journal, Maine Boats, Homes & Harbors and Ornament. He has helped produce several Maine Masters films, including the award-winning Imber’s Left Hand. He has written essays for numerous museum and gallery exhibitions and lectures widely, with talks presented in recent years at the Ogunquit Museum of American Art and the Newburyport Literary Festival.

Frederick Stecker is an Episcopal minister and a student of religion and culture. He holds doctorates from Bangor Theological Seminary and The Institute for the Study of Violence of the Boston Graduate School of Psychoanalysis. He is the author of The Podium, the Pulpit and the Republicans: How Presidential Candidates Use Religious Language in American Political Debate.